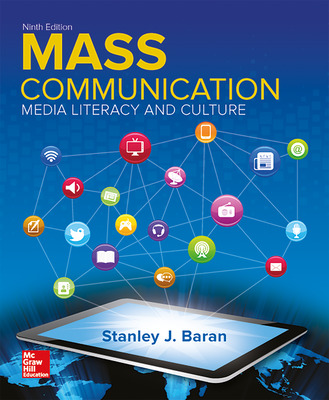 In a media rich world, mass communication is all around us, from CNN, to your morning commute radio show, to Twitter. Introduction to Mass Communication: Media Literacy and Culture personalizes learning for every student, no matter whom they are or where they are, by giving them a deeper understanding of the role that media plays in both shaping and reflecting culture, while also helping them understand their role in society through that process. Introduction to Mass Communication: Media Literacy and Culture is an integrated program that encourages students to be active media consumers and gives them a deeper understanding of the role that the media play in both shaping and reflecting culture. Through this cultural perspective, students learn that audience members are as much a part of the mass communication process as are the media producers, technologies, and industries. This was the first, and remains the only, university-level program to make media literacy central to its approach, and given recent national and global turmoil, its emphasis on media use and democracy could not be more timely. The new edition maintains its commitment to enhancing students’ critical thinking and media literacy skills. As in recent editions, chapters offer sections on smartphones, tablets, and social networking sites that discuss the impact of these technologies specific to the medium at hand. However, Chapter 10, now titled “The Internet and Social Media,” has undergone a major revision designed to focus greater attention on social media as a mass communication technology in its own right. Additionally, the new 9th edition will also feature SmartBook, the first and only adaptive reading experience, that highlights content based on what the individual student knows and doesn’t know, and provides focused help at that moment in need through targeted learning resources (including videos, animations, and other interactivities). SmartBook’s intuitive technology optimizes student study time by creating a personalized learning path for improved course performance.
}