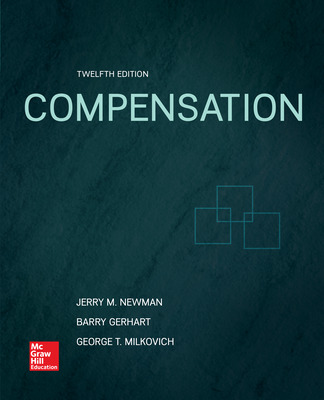 Best selling title. Tackles major compensation from three sides: theory, research, and practice - no situation can survive that onslaught! The 12th edition continues to emphasize the importance of total compensation and its relevance for achieving sustainable competitive advantage. Beyond how much people are paid, how they are paid matters too. Managing pay means ensuring that the right people get the right pay for achieving objectives in the right way. AUTHOR NOTES: Jerry Newman - research and teaching emphasis on compensation and rewards. Author of My Secret Life on the McJob: Lessons in Leadership Guaranteed to Supersize Any Management Style - awarded one of the twelve "Best of 2007" by the Wall Street Journal. Author of approximately 100 articles. In more than 30 years of consulting, Jerry has worked with such companies as Cummins Engine, AT&T, Graphic Controls, Hewlett-Packard, RJR Nabisco, Sorrento Cheese, McDonalds, and A & W Root Beer. Recipient of 9 teaching awards. Loves hearing from students and professors - feel free to reach out! Barry Gerhart - serves on the editorial boards for many Journals (including the Academy of Management Journal, Industrial and Laboro Relations Review, International Journal of Human Resource Management, Journal of Applied Psychology, Journal of World Business, Management and Organization Review, Management Revue, and Personnel Psychology). Recipient of many scholarly achievement awards. He is also a Fellow of the Academy of Management. George Milkovich - For more than 40 years, he has studied and written about how people get paid and what difference it makes. Milkovich served on several editorial boards and received many awards for his research contributions. He received the Keystone Award for Lifetime Achievement for the World at Work Association and the Distinguished Career Contributions Award from the Academy of Management. He is also a Fellow in both the Academy of Management and the National Academy of Human Resources. He chaired the National Academy of Sciences Committee on Performance and Pay. Milkovich is one of the founders of the Center for Advanced HR Studies, a research and development partnership of leading corporations and Cornell's ILR School. He also advised numerous companies around the world on their compensation strategies, received three outstanding teacher awards, and was a visiting professor at several international universities in Europe and Asia. Milkovich conducted executive seminars in many countries and served on advisory boards of leading academic/research centers in the United States and China.
}