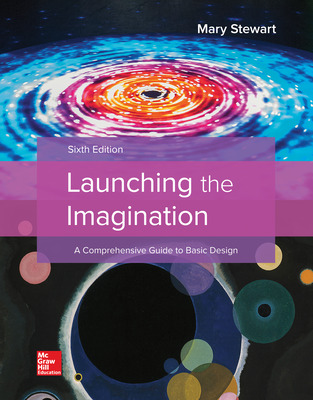 New and better than ever, the sixth edition of Launching the Imagination treats design as both a verb and a noun-as both a process and a product. Design is deliberate-a process of exploring multiple solutions and choosing the most promising option. Through an immersion in 2-D, 3-D, and 4-D concepts, students are encouraged to develop methods of thinking visually that will serve them throughout their studies and careers. Building on strengths of the previous five editions, the sixth edition of Launching the Imagination is even more: • Concise: Content has been refined so that maximum content can be communicated as clearly and concisely as possible. • Colorful: In addition to the full color used throughout the book, the writing is livelier than that in most textbooks. Analogies expand communication, and every visual example has been carefully selected for maximum impact. • Comprehensive: Launching the Imagination is the only foundational text with full sections devoted to critical and creative thinking and to time-based design. The photo program is global, represents a myriad of stylistic approaches, and prominently features design and media arts as well as more traditional art forms. • Contemporary: More than half of the visual examples represent artworks completed since 1970, and over 100 represent works completed since 2000. • Compelling: Interviews with exemplars of creativity have always been an important feature of this book. Three of the best past profiles have been revised and a new profile has been added. Now inserted into the body of the text, each interview deliberately builds on its chapter content.
}